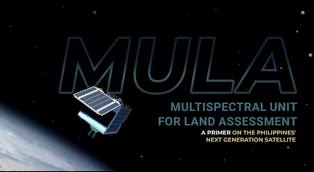 In a recent meeting with officials of the Philippine Space Agency (PhilSA) and the Department of Science and Technology (DOST) at Malacañang, Marcos expressed his optimism that the target to launch MULA satellite in 2025 will be achieved.

“I am looking forward to the development of our MULA satellite and its subsequent launching sometime in 2025,” Marcos said with elation. In attendance during the  meeting were DOST Secretary Renato Solidum Jr. and PhilSA officials led by Director General Joel Joseph Marciano.

Funded by the SOST, the MULA satellite project is being undertaken by the University of the Philippines Diliman and the DOST-Advanced Science and Technology Institute, in coordination with the PhilSA.

The MULA satellite is deemed a “game-changer” in Philippine space technology because it will be the largest satellite that will be developed and built by an all-Filipino team of engineers from PhilSA.

Weighing approximately 130 kilos, the MULA satellite can cover 73,000 square kilometers in 24 hours, gathering data on all land, air and sea territory of the Philippines.

Once in orbit, the MULA satellite can detect air and water quality; determine abundant fishing grounds; zoom-in on traffic situations in cities and urban centers; and detect presence of ships in Philippine waters.

Malacañang said Marcos lauded the DOST for its commitment and determination in the creation and development of purely Philippine-made MULA space satellite.

In a Facebook post, the President expressed confidence the use of science and technology will help the government uphold the national security and sustain the country’s economic recovery.

“I believe that through the use of data and science, we will be able to ensure national security, even our readiness to respond to calamities and boost our economy,” he said.

The funding for the MULA satellite is included in the proposed 2023 National Expenditure Program which. Once approved by Congress, it will be part of the 2023 General Appropriations Act.

For 2023, PhilSA seeks to earmark around P828 million for the development the MULA satellite project. Marciano earlier said the country is expected to gain P5.782 billion from the MULA project, mostly from the value of the data produced within a five-year lifetime for a single satellite.