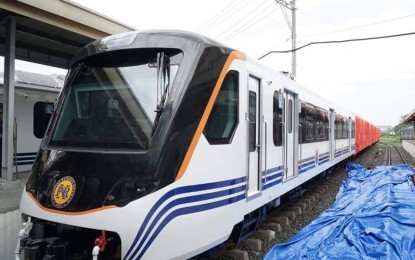 The proposed National Expenditures Program (NEP) for next year was submitted to the lower house last week. With its submission, Salceda said, “President Marcos has virtually declared that the era of big rail is back, and that he has fired the opening shot to roll out Build Better More.”

As principal author of a House Resolution that formally institutionalized Marcos’ infrastructure spending targets, and gave it the name Build Better More or BBM, Salceda said the President “is moving towards national backbone projects.” referring to PRRD’s main infrastructure legacy with over 20,000 infrastructure projects in the countryside.

He noted that while PRRD’s strategy was to bring the resources of the national government down to the countryside, PBBM is going to maximize the benefits of that strategy by bringing these thousands of smaller infrastructure projects together through big connecting projects, foremost of them the railways.

“President Marcos is increasingly looking like the Big-Ticket Project President, especially Big Rail. PBBM multiplied the Railway Program project almost five times that of the 2022 amount, or from 23.12 billion to 113.99 billion. Rail got the biggest increment percentage-wise, among major line items in the 2023 NEP,” he pointed out.

Salceda added that the bulk of the P380 billion unprogrammed appropriations for foreign-assisted projects will come from loan proceeds for railway projects, and some P108 billion in peso counterpart for rail projects have already been anticipated in the budget.

He noted that the government seems bullish about receiving loan proceeds from the Bicol Railway project, most specially, which is now being renegotiated with China.

“President Marcos proposes a large window of unprogrammed appropriations from loan proceeds so that, once the Bicol Railway loans actually materialize, we can immediately get the ball rolling with construction,” he added.

“This would be the largest ever railway budget of any Philippine president, making PBBM decisively the ‘Railways President…If all of these developments keep going well, PBBM will be the President of the Golden Age of Trains in the country,” he noted.

Salceda said the budget “certainly kicks off the era of Build Better More. Rail is decisively better at lowering logistics costs than any other land transport option. It is the cheapest per-kilogram option for freight, and clearly, the President wants significantly more of it.”

“Railway is also necessarily of longer distance than road infrastructure. So, PBBM is clearly trying to build a national backbone through rail. Inter-regional trade is bound to expand dramatically once this program is completed,” he said, adding he has also thanked Transport Secretary Jaime Bautista for “keeping Bicol Rail in the agenda” and appealed to Secretary Diokno to “move forward with the Bicol Rail loans.”

“I have asked Secretary Diokno to give the green light to the loans for Bicol Railway and the rest of the PNR South Long Haul project. If anything, the massive unprogrammed appropriations for loan proceeds is a sign that the national government is optimistic  we will have negotiations completed by this year, and loan proceeds received by next year,” he explained.

Salceda also shared that he is working with the DOTr for the establishment of the Legazpi-Daraga Tramway, which will make use of the defunct PNR lines passing through the Municipality of Daraga and the City of Legazpi to create a metro-wide tramway system. He said that the transport department has also expressed to him its intent to begin pre-project development.

“Together with the backbone Bicol Rail, I am optimistic about smaller metro-wide systems such as Legazpi Tramway which will probably draw from the Infrastructure Preparation and Innovation Facility of the DOTr.”